I’m sure many of you might be familiar with Flappy Birds – if not the game, then at least the viral Instagram filter in which you control the bird using your nose. That is exactly what we are going to make in this video.

We’re going to make our version of the flappy bird game using PictoBlox’s Human Body Detection extension in which we will control the bird using our nose. 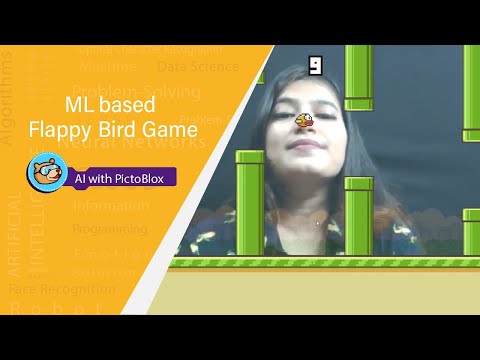 You’ll need the following things to make the make your own logo quiz:

Step 2: Setting Up the Project

Let’s begin by setting up the project.

Step 3: Setting Up the Stage for the Flappy Bird Game

In this video, we will mainly focus on writing the script to control the bird with the nose. We have already written the script to set up the stage and project. You can download the script from the link given here.

Once you open the script, you will notice a lot of sprites and their scripts.

We will briefly understand them and go back to writing our main script.

Logo of the flappy bird Sprite

The logo appears every time we start the game by clicking on the green flag. With the start of the game, the score is set to 0.

This sprite is the hero of our game, we will discuss the scripts into this sprite in the later part of the project.

The next two sprites are for the floor and the scripts written in them make them move continuously.

Upon clicking the start button, the game starts and the pipe hurdles start moving.

The next three are the pipe sprites. On clicking the green flag, these sprites should be hidden. As soon as the game begins, they should begin to move in continuously by changing the Y position randomly.

The next two sprites show the score of the player. As soon as the bird crosses the hurdle of pipe the score should increase by changing the next costume. We have used two numbers of sprites to show the score in two-digits. You may notice that we have used numbers as costumes, you can simply display the score in the variable too.

The next sprite if the game over sprite that should appear as soon as our bird touches any of the pipe sprites.

This is an optional sprite to make the stage look better. You can name the game or add the title sprite according to your choice.

Step 4: Writing the Script for the Flappy Bird’s Bird Sprite

Now, let’s come back to our main bird sprite.

Firstly, we will first set up the bird sprite as soon as the game begins.

Now, let’s make another script in the bird sprite to control it using our nose whenever we click on the Start button.

Script when the Bird touched the Pipes

Now, what happens when it touches the sprite. Thus, let’s make a small script for the same.

With this our script is complete. Click on the green flag and start playing.

With this, you’ve successfully made your flappy bird project.